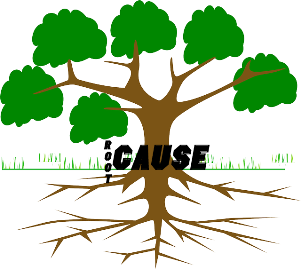 What is Root Cause?

Root Cause is the process of identifying the reason of the problem, which when removed will inhibit re-occurrence of the problem.

What is Root Cause Analysis?

Root Cause Analysis is an approach to find out the real root causes of problems and identify the required changes to prevent the re-occurrence of the problem.

Why do we need Root Cause Analysis?

Root Cause Analysis is done by continuously asking,

till we identify the primary cause of the problem.

It is an analysis where all the possible causes and effects are identified in the form of long chain with a relationship between them.

This analysis provides a means of generating ideas about why the problem is occurring and what are its causes and effects.

It is a systematic approach which mainly depends on the facts and will remove the causes of problems by considering the facts.

It is a two-step process.

In the first step ‘Failure modes’ where all the failure points are identified and will be analyzed and corrected in second step ‘Effects Analysis’.

Pareto analysis is a simple technique where minimal number of tasks are selected which will produce major significant effect.

Fault tree analysis is a graphical based technique where all the potential failures are collected before actual system failures. All the failures within the systems are represented in the form of Fault Tree diagram.

A graphic tool which will arrange the potential causes according to their level of importance.

It also known as the fish-bone diagram or cause and effect diagram.

It is a simple method of collecting, documenting and analyzing causes and organizing them in the form of visual map.

It is a design method which involves the tracing of pathways by which a target is severely affected by a risk which also includes any failed measures which should have prevented the unnoticed effect(s).

It is a technique which will record and display all the actions and conditions of a given problem which caused the problem to have occurred in a logical, tree-structured hierarchy.

It is a question-asking method technique of the Six Sigma DMAIC methodology which will find out the cause/effect relationships of a problem. The goal of this technique is to find out the root cause of the problem.